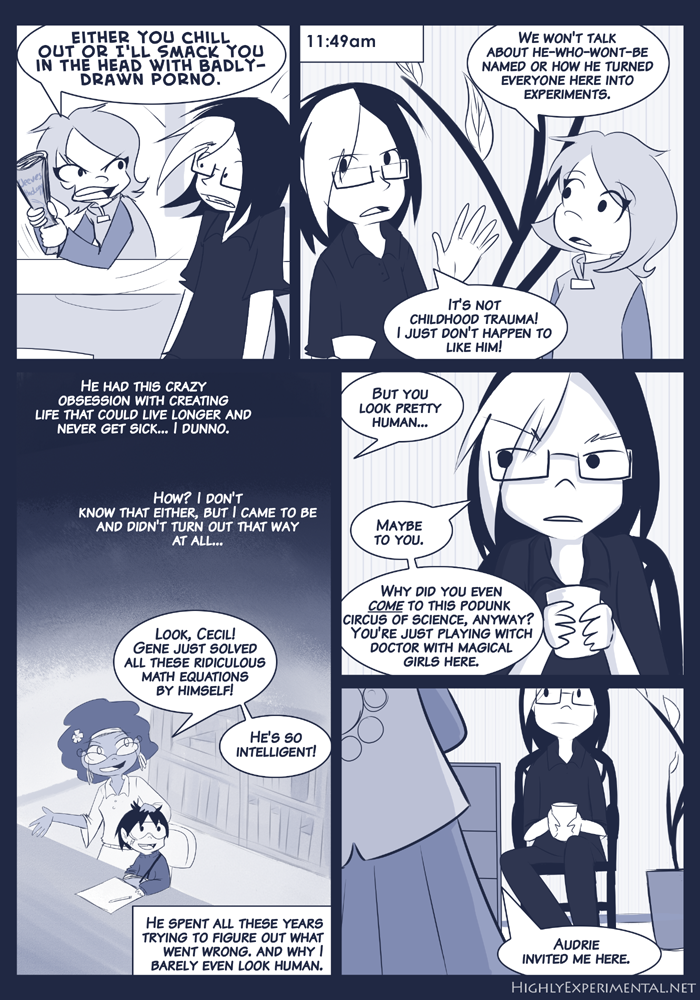 No, Geno! Finish your story before you pry into someone else's!

At some point, I dabbed in the recent chapter cover to Demented into the book that Terrie's holding, but then I zoomed out and realized what she was yelling in that panel and my finger panicked on the delete button because GOSH THINK OF THE MESSAGE IT WOULD HAVE GIVEN NEW READERS. Then I was going to put in a parody such as "Kyle and Hsu" but I don't want Smackjeeves Yaoi readers to kill me in my sleep. Terrie made this so difficult for me.

Also, I found new paper textures for SAI and slapped one on walls. Now I can cheat indoor backgrounds! Some more!

Lastly, I noticed that, ironically matching the last page update where Geno spilled pills, a webcomic called Pills had advertised itself in my Project Wonderful box. I don't know if this was coincidental or what, but I visited the comic and liked what I read so far, so there's another sweet recommendation!

And how about some Experiment 073? I came across it recently when its author Thedandmom took over the art direction for ... you know what? Most of you are Mugo readers you know how much I love her stuff I don't need to repeat myself at 4am! You'll find this one newly-added to the sidebar for your comic-jumping fantasies. I'm going to bed.

Now there is something else I must read!

I think Geno has some self image issues, at least he's not a robot monkey!

What am I saying?

For, like, 2 seconds I saw you working on this page. XD Right after that I realized how late it was compared to how early I had to be up in the morning.